Colonel Jason L. Knobbe is the Commander, 184th Wing, Kansas Air National Guard, McConnell Air Force Base, Kansas. Colonel Knobbe commands more than 1,300 Guardsmen who execute a broad spectrum of missions including intelligence surveillance and reconnaissance, cyber and information operations, and command
and control. In addition, the wing fields a full complement of support functions including civil engineering, security forces, medical, and force support units. All of these missions greatly enhance the Air Force’s capability to provide actionable intelligence and information dominance for combat forces around the globe.
Colonel Knobbe is a 1994 graduate of the University of Kansas. He earned a Masters of Science, Education and a Reserve Officer Training Corps commission from the University of Kansas in 1998 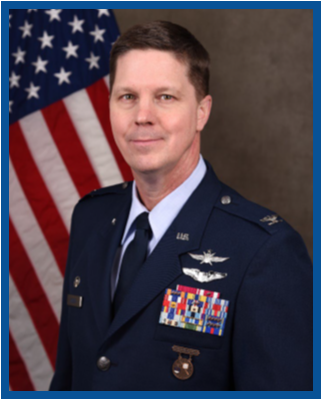